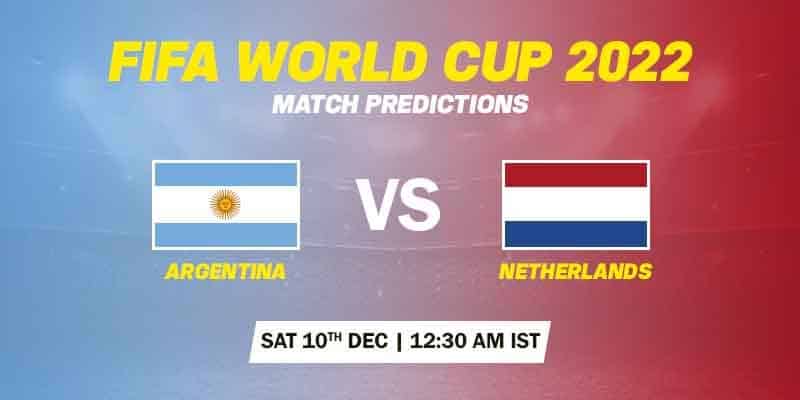 The first teams to reach the quarter-finals of the FIFA World Cup 2022 are Argentina and Netherlands. Argentina vs Netherlands is scheduled to take place on 10th December at Lusail Stadium, Lusail Qatar. Netherlands defeated the USA and Argentina defeated Australia in their round of 16 fixture. Both teams have reached a stage where they can’t have loose ends in their style of play.

As predicted based on the past international fixtures, Argentina has come a long way in the tournament and they have successfully won all their fixtures except the one they started their tournament with. Their defeat against Saudi Arabia has become a major motivation for the team. Messi and his men have become more aggressive on the field and their defence is turning out to be unbreakable.

Netherlands witnessed a comfortable win against the USA in their knockout fixture by 3-1. L Van Gaal will be happy to see his players performing positively in the recent matches and will be hoping to take them closer to the FIFA World Cup trophy. The Netherlands has not lost a single fixture in the tournament overall and this shows their control and dominance over the game. Playing against Argentina won’t be an easy task but both teams are equally matched.

The biggest worry for Argentina right now is the injury of Angel Di Maria. Before they come to play against the Netherlands, Maria needs to have a speedy recovery. Angel Di Maria missed out on the game against Australia and Scaloni will be hoping that the striker recovers before the quarter-final fixture. Julian Alvarez is set to maintain his spot in the XI to join Messi. Another problem that Argentina is facing is with their structure of defence line. It is becoming easier to break and the Netherlands is not a team against which they would want to have a weaker defence.

The Netherlands had a scare of the Covid-19 outbreak in their camp before the game against the USA but fortunately, it was not a major alarm. Louis Van Gaal has a very settled lineup and all the players are well-focused on their game. The Netherlands has come across as a tough team to play with as they have not lost any game in the tournament yet. All the eyes will be on Memphis Depay and Frankie de Jong in the quarter-final game.

Both the teams are equally matched and we predict that the game will go to penalty shootouts and in the end, luck will play its part.

Our expert analysis says that both teams are equally strong and hence the game might witness penalty shootouts for the final decision. For some great odds create an account at bet365.