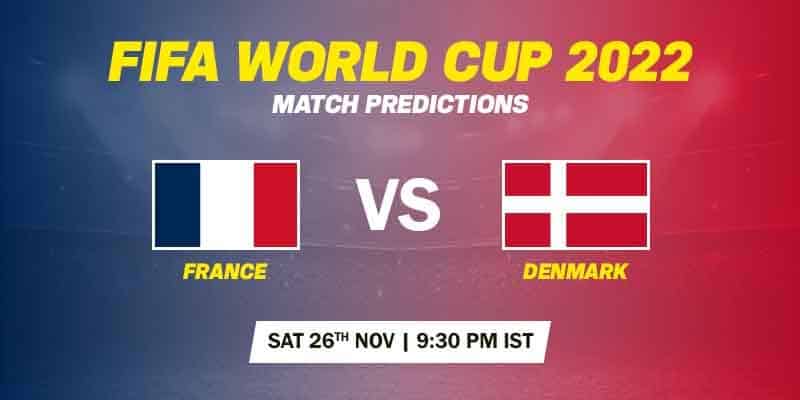 France and Denmark, arguably the two strongest teams in Group D, will face each other in their second match in the ongoing FIFA World Cup 2022 on Saturday. There have been 15 games between the two, with France winning eight of them. The most recent match, however, which was a part of the Nations League, was won by Denmark 2:1.

Both France and Denmark will be vying for the points that might help them to advance with one game remaining to the round of 16. That can indicate a cagey affair, but one that also offers few goals. France came into this World Cup with a number of big-names missing through injury but they still have enough firepower to help them with all three points against Denmark.

In the most recent Nations League campaign, Denmark defeated France both at home and away, so they will approach this match at the weekend with confidence. But Kasper Hjulmand's club may once again fail due to a lack of a top goal scorer.

After a convincing 4-1 win against Australia in their opening group encounter. Oliver Giroud scored a brace to calm the nerves of France who are without their star striker Karim Benzema. Giroud showed that Deschamps can rely on him throughout the Qatar World Cup 2022. Apart from that Kylian Mbappe and Adrien Rabiot also found themselves on the scoresheet. There is no doubt that France will be going as favourite in this one. However, there suffered a big blow in their first encounter when defender Lucas Hernandez was injured and was later ruled out of FIFA World Cup 2022. Paul Pogba, N'Golo Kante, and Presnel Kimpembe, who were crucial to France's World Cup victory in Russia in 2018, are also absent for France.

Denmark were held to a goalless draw by Tunisia. This means it could be an important encounter for them if they want to make it to the knockout stage of the Qatar World Cup 2022. Less than a year and a half after suffering a heart episode while playing for Denmark at Euro 2020, Christian Eriksen made his major tournament comeback in this game. It is expected that Denmark will go with the same line-up and have a pretty balanced squad to give France a run for its money.

If the players are free to express themselves, this could be the match of the round, which would cause celebration among the spectators. However, both coaches might take a cautious approach as well and it could end up being a tight and cagey outing. Our expert feels that it could be a 1-1 draw despite France being superior on paper.

Our thinking is that it could be a 1-1 draw with Denmark defending deep. For some great odds create an account at bet365.