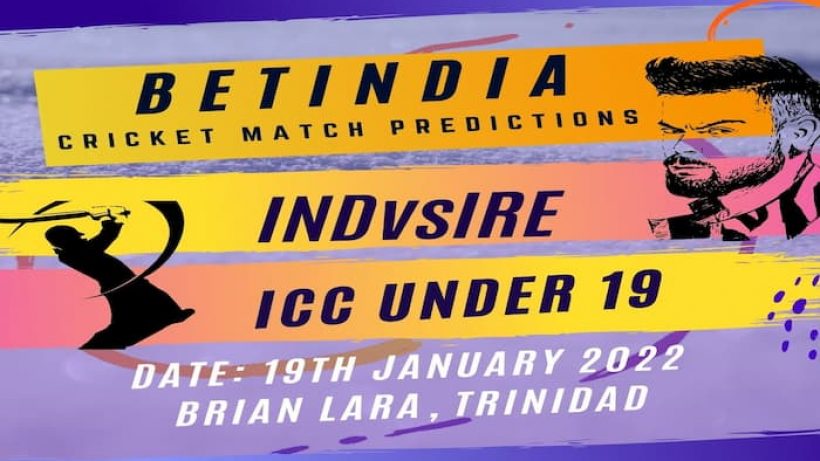 The ICC international under19 cricket world cup has begun and it is going on at a fast pace. IndiavsIreland Under19 match is scheduled to start on Jan 19, 2022. Both the teams are in a full swing and so are the fans to see who is going to win the match.

All the best betting sites in India are publishing the best odds and helping bettors to win big. This is the second match for both the teams after their win the previous match respectively. India defeated South Africa and Ireland defeated Uganda for the better.

Do the bollybet login here

Do bollybet login immediately and get live updates about the match, the bookie site is easy to understand it has published odds related to the match.

Download the bollybet app and know more about the IndiavsIreland Under19 match, also the app is very user-friendly and easy to use for Indians.

The odds of the IndiavsIreland Under19 match are discussed below based on the stats and performances of each team. Let's focus on each team individually and draft a conclusion.

The India U19 team is going to be filled with confidence after winning its match against South Africa. It was thought to be a tough match but the Indian team came through quite easily. this definitely fills up the Indian fans with more hopes and expectations on the team.

The match is scheduled to begin on 19th January 2022 at Brian Lara Stadium, Trinidad. It is going to be a 50 overs match. 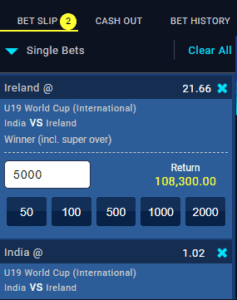 Claim the great bollybet bonus offer right now by creating the account and depositing the minimum amount required into the account. With the money, bonus earned bet on the IndiavsIreland Under19 match.

India: In the previous match, the top performers were Yash Dhull, who lead a fightback with the bat and top-scored with 82 runs on his hand, Vicky Ostwal who picked up five wickets and brought India back into the match when no hopes were left.

Nishant Sindhu bowled a brilliant ten overs in the match and did not give runs and built-up pressure for South Africa batsmen. The whole team has brilliant players and they all came together and the output is visible to everyone.

India has got a strong batting side and can crush the Irland team no matter what. Harnoor Singh is expected to do some amazing batting and also score a lot of runs for the team. Yash Dhull is also in great consideration as he is seen in the form in the last match.

Among the bowlers, Rajvarshan Hangargekar is expected to be the toughest and Ireland is going to have a tough time batting to him. He is one of the fastest bowlers in the tournament and could trouble the Ireland batsmen. Vicky Ostwal is also the next best bowler and top performer.

We can understand that India has great chances today to dominate the IndiavsIreland Under19 match, However, let us look into the Ireland team starts for better clarity.

Ireland: Ireland though won its way to this IndiavsIreland Under 19 match, there are high chances that they will be defeated by the Indian players this time. India is on a whole another level to Ireland and this is going to be a tough challenge for Ireland players.

Ireland's wicketkeeper, Joshua Cox, scored 111 runs and not out is the leading batsmen for no doubt, but the other batsmen are just not in the form and didn't even get 50 runs and that is very concerning in Ireland.

The batting lineup will not hold much longer for the superiority bowling of the Indian bowlers and this Bowlin can be the most superior attack they have ever faced to Ireland batsmen. Also, the pitches are a bit slow so a trial by spin is expected, which is never easy for European players.

The bowling of Ireland is average when compared to India, Ireland let Uganda score 197. Matthew Humphrey picked up four wickets himself and stood as the leader of the attack. However, due to the lack of other attacking bowlers in the team and less teamwork compared to the Indian team, Ireland has fewer chances in IndiavsIreland Under19.

Our Verdict – India Wins the IndiavsIreland Under19.

India is definitely the right choice for the bettors today, as India is totally on the next level and they can easily crush down the Ireland team to win the game.

Ireland though applies different strategies this time, It is clear that they still can not make it up to the level of the Indian U19 team. So the Europeans do not stand a chance in today's IndiavsIreland Under19 match.