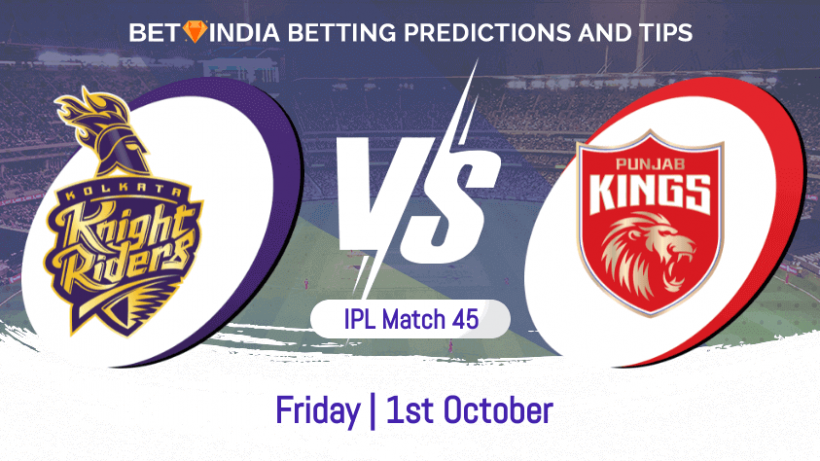 As the group stage of the 2021 IPL season is slowly drawing to an end, each side now only has a handful of games remaining. We are entering a crucial period as teams can no longer afford any slip-ups if they are to try and boost their playoff chances. Two sides that need a win desperately are the Kolkata Knight Riders and the Punjab Kings, and they meet each other in Kolkata Knight Riders vs Punjab Kings 45th Match IPL 2021.

The Knight Riders currently find themselves in the final playoff spot but only because of their good net run rate. The Punjab Kings are in the 6th spot in the table but can go level with the Knight Riders if they win this match.

The Knight Riders head into this match with all the momentum thanks to an impressive win over the Delhi Capitals. Winning with an over and a half to spare, the Knight Riders put their disappointing defeat against the Chennai Super Kings behind them and will now be fancying their chances of locking up a playoff berth.

The Punjab Kings need a quick turnaround if they are to make a late push for the playoffs. Having lost three of their last four games, including their last match against the Mumbai Indians, the Kings will need to win this match if they are to remain in the playoff hunt.

It should be a tense but fantastic game between two sides that have some of the most exciting T20 players in the world in their lineups.

In their last game, handed a tough assignment against one of the form sides in the IPL, the Knight Riders would have been delighted to emerge victorious by three wickets, winning with an over and a half to spare. Shubman Gill, Nitish Rana, and Sunil Narine all scored vital runs, and the New Zealand bowling duo of Tim Southee and Lockie Ferguson starred with the ball, taking three wickets between them. Recovering from losing four of their first five matches, the Knight Riders have now won four of their last six to currently occupy the final playoff spot.

The Punjab Kings have had a really tough campaign, but due to the inconsistency of others, they somehow remain in the playoff picture. A defeat against the Knight Riders will leave the Kings all but eliminated, so this is a match they must win.

The Kings, in their last match, would have been disappointed to lose to the Mumbai Indians. They scored steadily throughout their innings but couldn't quite get a grasp of the pitch, scoring a modest 135. Thanks to match-winning knocks from Saurabh Tiwary and Hardik Pandya, the Indians reached the Kings total with an over to spare. Aiden Markram was the Kings' standout performer, with the talented South African scoring a total of 42 runs. More will be needed from Markram and company if they are to secure the win they vitally need here.

The match is due to be held at the Dubai International Cricket Stadium. With the weather set to be perfect, everything should be set up for a great game. The pitch is a slow and sticky one which can make batting difficult. Traditionally, a score of 160+ plus is a great total, but the average score for IPL games held at the venue is 144. The team that wins the toss has options; they can try and chase or try and put a competitive score on the board as a big total could be easily defended here.

You could make the argument that on paper, the Punjab Kings have the better team with established stars such as Chris Gayle, KL Rahul, Aiden Markram, and Mohammed Shami, all being able to put in match-winning performances on their day. However, the inconsistency of the Kings has to be the worry, and any bet on them requires a leap of faith that the right Kings team shows up. In a tournament that has twisted and turned, we are predicting that there are more twists to come and are going to side with the underdogs in the hope that they will be doubly motivated to keep their playoff hopes alive.

Place a bet on Bet365 and get a welcome bonus of up to Rs. 4,000 if you bet on the Punjab Kings winning in Kolkata Knight Riders vs Punjab Kings 45th Match IPL 2021.

For the Kings to have a chance to win this match, they will hope that their captain, KL Rahul, can deliver the goods. Rahul was in great form in India's Tour of England but has struggled in this year's IPL. Rahul has proven in the past that he can come good on the big occasion, and his team will be hoping he can do so again.