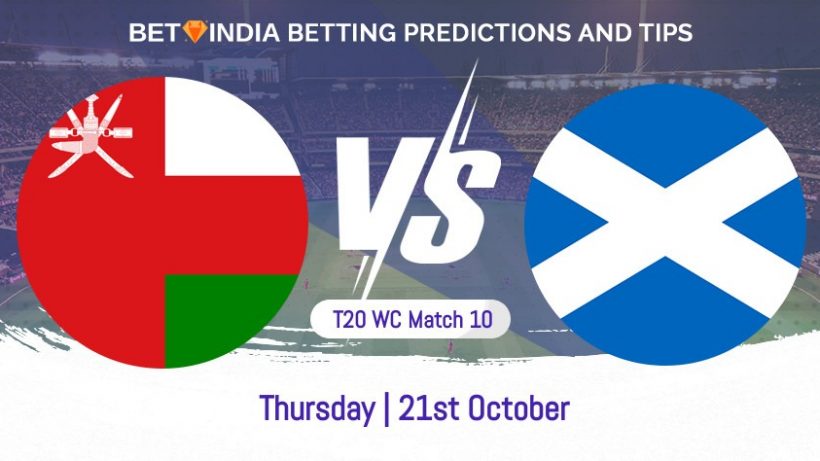 Scotland, leaders of Group A, have a chance to cement the top spot when they take on Oman in this crucial T20 World Cup round 1 match – Oman vs Scotland.

Scotland turned Group A on its head when they beat Bangladesh in their opening game and duly followed up that win with a professional win over tournament minnows PNG. A loss for the Scots here could see Oman, Bangladesh, and the Scots competing on the net run rate in order to qualify, as all the sides could finish on four points.

Oman has performed well in front of their home fans and will see this as an opportunity to make history and progress through to the Super 12 phase. They thrashed PNG before putting up a good fight against a much more experienced Bangladesh side. Oman know they need a win here to qualify, as Bangladesh will most likely beat PNG. A loss would more than likely see them eliminated.

In a tight-looking contest, it's Scotland who are the bookies' favourites, with the Scots being priced at 1.62. Oman, to pull off the upset, are priced at 2.63.

Oman have put in some really credible performances in the two matches they have played in the tournament so far. They absolutely destroyed PNG in the first group game before battling hard but just falling short against Bangladesh. Oman know that a win here will give them a great chance of getting through to the Super 12 phase of the tournament. They are above Bangladesh on net run rate currently, and by the time Oman take the field, they will know exactly what they need to do in order to qualify. If Bangladesh were to somehow lose against PNG, then that should be enough to see Oman qualify.

In their last match, the opening batsman Jatinder Singh led the batting charge, scoring an excellent 40 off just 33 balls. Singh is clearly seeing the ball well and revelling in the home conditions, as this 40 followed a 73 in match 1 against PNG. To back Singh to carry on his excellent form, he is priced at 3.10 to be his team's top scorer.

Following the heroics in their first group match against Bangladesh, there was always a worry that a matchup against PNG could bring the Scots back down to earth with a bump. Instead, the Scots maintained their focus and got the job done efficiently, winning by 17 runs after posting a total of 160.

The Star of the match was Richie Berrington, who scored an impressive 70 off just 49 balls. His knock included six 4s and three 6s. With the ball, Josh Davey did the damage, recording fantastic figures of 4-18. Berrington to pick up where he left off and be Scotland's top scorer in this match against Oman is priced at 5.00.

The Scots would have quietly fancied their chances of qualifying from this group but will be delighted that they have almost done it with a match to spare; they will want to finish the group stage off in style and take precious momentum into the Super 12 phase, where they will face off against some of the world's finest.

In total, there have been 20 T20 matches held at the venue, with the team that chases winning 13 of the 20. There has only ever been one T20 century scored at the ground, and in a match that both teams will want to win, a bet on that changing is priced at 11.00.

Betting Predictions for Oman vs Scotland

Let's take a look at a few important betting predictions for Oman vs Scotland:

Both teams head into this match in decent form, and this is a tough match to call; it is a match that could swing either way.

The Scots have to be so proud of the manner of their first two victories. They are playing some really effective cricket across all three phases of the game, and on their day, they could be a threat to most teams in the world.

Scotland find themselves in an awkward position as although they have won both matches, their net run rate isn't as good as it could have been. A loss to Oman and Bangladesh earning a victory over PNG could see the Scots miss out on qualification altogether through net run rate. For the first time in this tournament, the Scottish team is under the pressure of expectation, and it will be interesting to see how they respond.

Oman will be boosted by the fact they are playing in home conditions and in front of home fans. Oman know that this is a must-win match if they are to keep their World Cup dream alive. Interestingly, they have faced off against the Scots five times in T20 and ODI cricket over the last three years, and Scotland have won four of these contests.

In what could be a really close match, we will side with the Scots to make it 5 victories out of the last six matches against Oman, but make no mistake; this could be a game that goes down to the last few balls of the match.

Either team to win the toss can be backed at 1.91. On a pitch that should offer something to both batsmen and bowlers, the team that wins the toss will be looking to chase as the ground seems to favour the chasing team heavily. For the team that bats first, the average score in the first innings is 149, so anything around this number will be tough to chase, as demonstrated by Bangladesh's failure to reach the 140 set by Scotland back in match 1.

In a pivotal match, we always believe that any top batsmen bets should be placed on men in form. However, heading into this match, we are going to pick a man who scored the second most amount of runs in Scotland's last match, and that was Matthew Cross.

Cross is a dynamic wicket-keeper batsman and has the dynamism and power to score quickly, as demonstrated by his 45 off 36 balls last time out against PNG. His runs were a big reason behind Scotland's success and how they qualified for this World Cup, and odds of 5.50 to be his team's top scorer are really appealing.

Place a bet on 1xbet by registering with the code 1BETINDIA1 and get a 130% bonus of up to Rs. 13,000 if you bet on Matthew Cross to be Scotland's top batsman in Oman vs Scotland T20 World Cup.