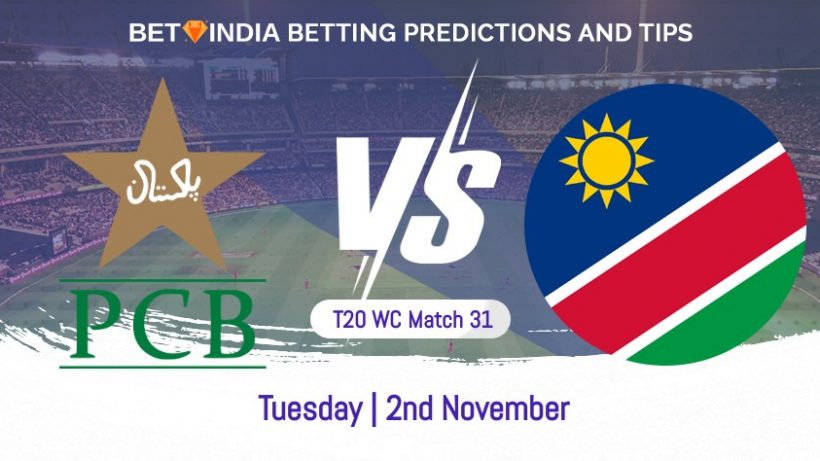 Pakistan will be looking to cement their place in the semi-finals of this year's T20 World Cup as they take on Super 12 minnows Namibia in Pakistan vs Namibia.

Pakistan are sitting pretty at the top of the group with three wins from three, and a victory here will see them qualify and, with it, most likely a 1st place finish.

This will be Namibia's third match of the Super 12s. They beat fellow round-1 opponent Scotland before getting outclassed against Afghanistan. If Namibia were to pull off the upset here, it would go down as one of the biggest shocks the game has ever seen. The bookies have the Namibians all the way out at 11.00 to pull off the upset, with Pakistan priced at 1.05.

When we did our preview of the Pakistan vs Afghanistan game, we called out that despite Pakistan recording two fabulous victories, a Pakistan win against Afghanistan was certainly not assured, and it could be a game that went right down to the wire. How right we were.

After some good bowling, they reduced Afghanistan to a total of 147. Pakistan, in their chase, lost their way in the middle overs and left themselves needing to score 24 in their last two overs to avoid defeat.

Not for the first time in this tournament, up stepped Asif Ali, who in one over heaved four huge sixes to all corners of the ground to ensure Pakistan would win this match with an over to spare. It was a brutal display of ruthless, clean hitting, and if Ali gets the opportunity to bat against the Namibians, more of it might be on the way.

In a game where value is so hard to find, backing Ali to be his team's top run-scorer could be one of the better plays of the match. Ali can be backed at 8.00.

Namibia have far exceeded expectations by progressing this far and will be delighted that they have recorded a Super 12 victory. With the match against Scotland now out of the way, this was always going to be a stretch of games that would be tough. They knew that a win against Afghanistan was always going to be a hard task, but they would have liked to have been more competitive.

Some poor bowling saw Afghanistan reach 160, and you felt that was always going to be plenty to defend. Despite their best efforts, the Namibians came up well short and finished their innings for 98. Unable to handle the spin of the canny Afghan bowlers, the Namibians will face similar challenges against this high-flying Pakistan side.

One batsman who stood up to the challenge was David Wiese, who has been Namibias standout performer with both the ball and bat. Wiese has formally represented South Africa in the past and still is a class act. He is priced at 5.00 to be his team's highest run-scorer and 3.75 to be their leading wicket-taker. Both could be savvy bets.

Betting Predictions for Pakistan vs Namibia

Let's take a look at a few important betting predictions for Pakistan vs Namibia:

It's impossible to think that Pakistan won't dominate this matchup, and their odds of 1.05 will make them the shortest price favourites in any game held in this World Cup so far.

Pakistan and England have been the two standout teams, and every phase of Pakistan's game is just clicking. The only way Pakistan will lose this game is if they beat themselves or become complacent.

From a team line-up point of view, it will be interesting to see if they rest some players for this clash or whether they stick with the same playing 11 that has started this tournament so brilliantly.

Namibia will fight, and they do have some players who can compete and perform well at this level, but the victory will fall to Pakistan and, with it, a place in the semi-finals.

At the top of this preview, we highlighted the dangers that both Mohammad Rizwan and Babar Azam possess. Both are wonderful players, but we are going to side with Azam to score the most runs here for his side.

Azam got off to the perfect start against India, scoring a stunning 68 off just 52 balls. He then only scored 9 in his next innings but showed his class against Afghanistan, scoring 51. He has looked a class apart at times in this tournament, and Babar will be eyeing up another big score here.

Place a bet on 1xbet by registering with the code 1BETINDIA1 and get a 130% bonus of up to Rs. 13,000 if you bet on Babar Azam to be Pakistan's top batsman in Pakistan vs Namibia T20 World Cup.