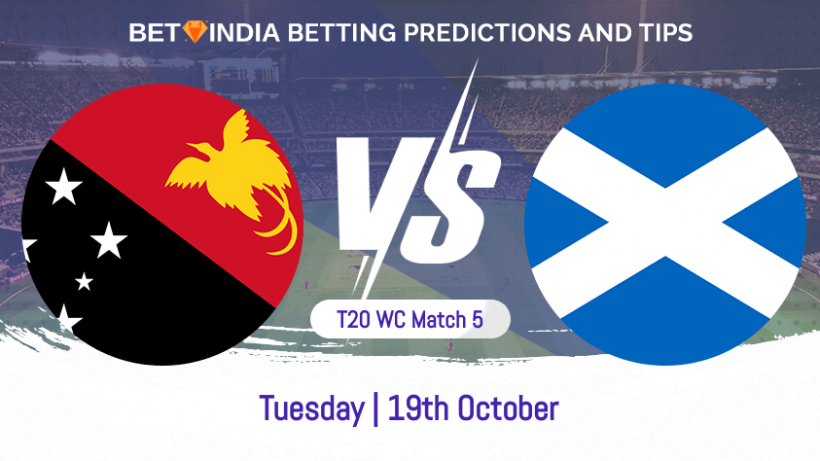 As many pundits predicted, we had our first upset of the T20 World Cup when Scotland beat Bangladesh in match 2 by six runs to give themselves a fantastic chance of qualifying through to the Super 12 phase of the tournament.

Next up in round 1 is ‘PNG vs Scotland'. PNG were soundly beaten in their opening fixture by Oman. This means that a heavy Scotland victory here could be enough for them to qualify through to the next phase of the tournament. On the other hand, PNG need a victory if they are to stay in contention for qualification; a defeat will see the islanders become the first side to be eliminated from this year's competition.

The bookies aren't taking any chances with the Scots this time as they are currently 1.14 to win their second successive match of the tournament, with PNG at 5.50 to claim the victory.

PNG entered the World Cup as the competition's underdogs despite finishing second in the 2018 qualifying event. PNG, perhaps more than any other nation, felt the full force of the Covid pandemic as they weren't able to play any cricket since the qualifiers. The rust showed as they lost by ten wickets to Oman, with Oman reaching PNG's total with over six overs still to be bowled.

The worry for PNG is their batting lineup, as outside of captain Assad Vala and Tony Ura, there isn't a lot. Ura lost his wicket for a duck, but Vala was the star of the show, scoring a really well worked 56 off 43 balls. If PNG are going to make any progress in the tournament, they will need Vala to step up again. The PNG captain is 3.25 to be his team's top scorer.

This is why T20 is the most exciting format of cricket; over 50 overs, it's very hard for emerging nations to beat the more established sides, but in T20, shocks can happen, and this is precisely what happened when Scotland beat Bangladesh.

The Scots got off to a nightmarish start, losing captain Kyle Coetzer for a duck, and then they were reduced to 53/6. Bangladesh looked like coasting to an easy victory. However, 45 from Chris Greaves and a supporting 22 from Mark Watt saw the Scots post a score of 140.

Bangladesh looked to be well on their way to victory before Scotland were able to take a cluster of wickets, with Brad Wheal and Greaves taking five wickets between them. Needing 23 to win off the final over, Bangladesh managed to score 17, but the Scots were able to hold their nerve and hold on for a memorable victory.

Betting Predictions for PNG vs Scotland

Now let's take a look at a few important betting predictions for PNG vs Scotland:

Scotland's victory over Bangladesh blew open Group B, and they have put themselves in a prime position to qualify for the Super 12 phase. They will be licking their lips at the prospect of facing a PNG side that got dismantled against Oman.

Scotland are the superior team across all facets of the game and should win this game. PNG don't have the experience or the depth to compete consistently at this level yet, and this could be another tough day for the men from PNG.

Either team to win the toss can be backed at 1.91. On a pitch that should offer something to both batsmen and bowlers, the team that wins the toss will be looking to chase as the ground seems to favour the chasing team slightly. For the team that bats first, the average score in the first innings is 156, so anything over this will be tough to chase.

Much of the lead-up to the T20 World Cup was on Scotland's captain Kyle Coetzer. Coetzer will be disappointed in the manner of his dismissal in the first group game and will be looking to make amends against a PNG bowling attack he should be able to stick his teeth into.

Coetzer averages just over 23 in his T20 International career, with a little over 113 as his strike rate. He so often sets the perfect platform from which the rest of the batting lineup can follow. This is a massive opportunity for Scotland to progress through to the Super 12 phase of the tournament and look for Captain Coetzer to lead by example and be his team's top scorer.

Place a bet on 1xbet by registering with the code 1BETINDIA1 and get a 130% bonus of up to Rs. 13,000 if you bet on Kyle Coetzer to be Scotland's top batsman in PNG vs Scotland T20 World Cup.