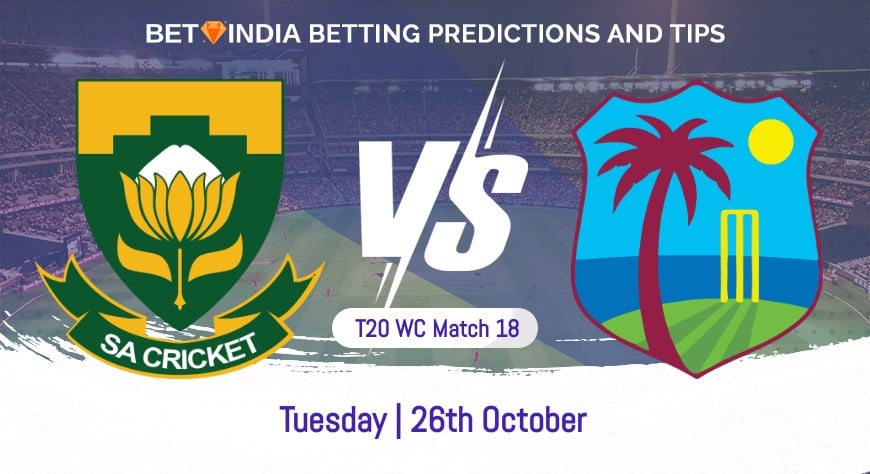 In their first match, West Indies had a terrible start to their campaign, getting bowled out for meager 55 runs against England. They lost to England after 5 consecutive wins in the T20I World Cups. They did manage to take a few English wickets, but they did not have enough on the board to make a match out of this.

With the quality of power hitters West Indies have with them and South Africa's pace attack, we might get to see a perfect T20 thriller in Dubai.

Nothing is alarming for South Africa in the way they lost the first match. They did struggle while batting on a tricky surface, but so did the Australians. Ten extra runs, and South Africa might have been on the winning side. Markram had a good outing with the bat, and he holds the key for this South African batting lineup.

Their bowling unit looks sorted. Four out of five bowlers were among the wickets, and the highest economy for the bowlers was just a tad over 7 runs per over. It looks unlikely that they will tinker with the bowling lineup. Pretorius should continue to be the bowling all-rounder.

West Indies had a nightmarish outing against the tournament favourites England. No pitch is bad enough to get bundled out for 55 runs. Except for Chris Gayle, no batter reached double figures. This loss also ended their unbeaten run against England in the T20 World Cups.

There was a small positive amid this disaster for the West Indies in the form of Akeal Hosein. Not only did he bowl superbly, but he was also quite acrobatic in the field, especially while dismissing Bairstow with a stunner off his own bowling. Apart from that, it was a forgettable night for the West Indies.

The pitch has favoured batters in the IPL as well as the first few matches of the T20 World Cup. The dew will be a factor, as has been the case in the recent past. It will be a relatively hot and humid afternoon in Dubai, with plenty of sunshine.

Let's take a look at a few important betting predictions for South Africa vs West Indies:

Despite the stunning loss in the first game against England, West Indies are the favourites to win this battle against South Africa. They are T20 specialists with many T20 champions in the team. Such has been the dominance of players in this squad, such as Gayle, Pollard, that very few would count them out in this format of the game.

South Africa would feel they have a chance against this low on confidence West Indies side, but the Windies still remain a strong contender, and as per the odds, they are likely to topple South Africa in the 18th match of World Cup 2021.

The first 4 matches of the tournament have been won by the team batting second. The team winning the toss will try to bowl first here as batting became a bit easier while chasing the target. Due has helped the batting teams in the second half. Both teams have odds of 1.91 each to win the toss here.

South Africa's wicket-keeper batter, Quinton de Kock, is yet to deliver in this tournament. In the last 9 T20 international games he has played, he has scored 399 runs at an average of 57.00. After an off game, he is likely to be back in form in this important stage of the tournament. He is a batter West Indies must be wary of in this crucial encounter.

Place a bet on 1xbet by registering with the code 1BETINDIA1 and get a 130% bonus of up to Rs. 13,000 if you bet on Quinton de Kock to be South Africa's top batsman in South Africa vs West Indies T20 World Cup.