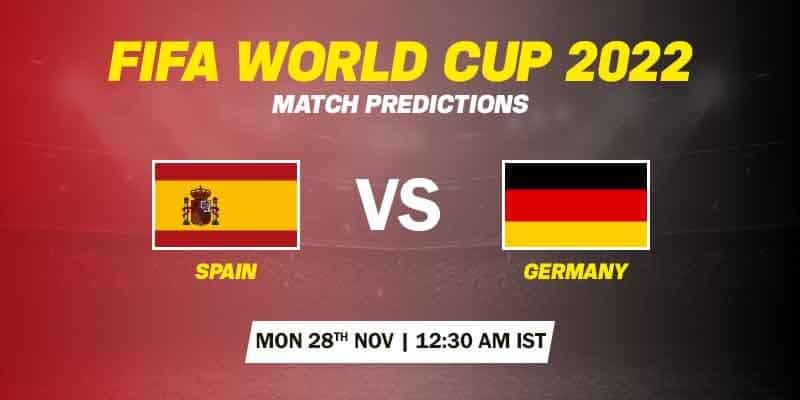 Spain vs Germany encounter will be going to be one of the most eagerly anticipated games in Group E in the ongoing FIFA World Cup 2022. This is a must-win encounter for Germany as a loss here would end their Qatar World Cup campaign as they have already lost their first match against Japan on Wednesday.

The German team were already under pressure to improve on the disastrous showing in Russia four years ago – and the Nations League campaigns that have followed. And the pressure has already increased on them after a shocking loss against Japan. Even a draw here could end their hopes of making it to the next round if Japan wins against Costa Rica in the other Group E fixture.

Luis Enrique's side has been proving over the last few years that a system is more effective than individual star players and their 7-0 win in the opening encounter is enough to prove that Spain have enough quality in them to go all the way. Their passing was class and Enrique will surely be not tinkering with the starting XI. Pedri and Gavi will be once again key in the midfield along with Ferran Torres on the wings. After a stunning performance on Wednesday, Spain is undoubtedly going to be a team to watch out for moving forward in the competition. Spain has been regarded as one of the elite sides, but have frequently struggled to live up to the billing in the last few major championships.

Leroy Sané will likely be absent for Hansi Flick once more, giving Jamal Musiala another opportunity to prove why he is so highly regarded at Bayern Munich. It's a must-win match for the Germans and their gameplay has to be perfect in order to get all three points. It's a daunting fixture for Germany. In 2018, Germany's opening match in Russia ended in a 1-0 loss to Mexico. They rallied by winning 2-1 in the second match and they will need the same motivation against Spain as well.

It's a must-win encounter for Germany and they will surely be under pressure. But keeping in mind the quality they have in the squad – their midfield can surely dominate the young Spanish think tanks and can nick a cheeky win. We don't expect this to be a goal thriller but a cagey affair.

Spain vs Germany will be a tight encounter and our expert thinks Germany can edge Spain 1-0 or 2-1 given the importance of the game from their point of view. You can find the latest odds after a quick registration with bet365.

Place your bets on bet365