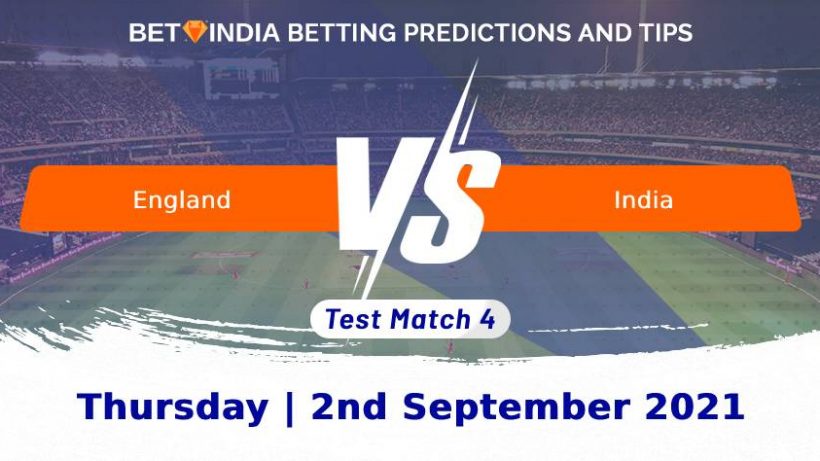 The 4th Test between England and India is scheduled to take place on September 2nd at Kennington Oval, London. The 5 match series is poised at 1-1. England beat India in the third test by an innings and 76 runs.

England are set to miss Jos Buttler due to family reasons. Sam Billings has been added as a cover for Jonny Bairstow, who will keep the wickets in the England vs India 4th Test 2021. Chris Woakes has replaced Saqib Mahmood in the 15-man squad.

India should replace under-fire deputy Ajinkya Rahane with Hanuma Vihari to strengthen the middle order. All-rounder Ravindra Jadeja was taken for a knee scan following his injury and may get replaced by Ravichandran Ashwin. Shardul Thakur is expected to come in for Ishant Sharma.

The weather will be partly cloudy throughout the test, with showers expected on day 4. The pitch is expected to be ideal for batters in the first innings, and it should assist spinners in the last two days of the match.

England are the favourites to win the 4th test against India after a scintillating show at the Headingley. They beat India comfortably in the third Test by an innings and 76 runs.

England skipper Joe Root should be the top batsman for England. Root has scored a century in every Test played so far in this series. Opener Rory Burns is also pitched to be one of the top batsmen for England.

Place a bet on Joe Root or Rory Burns being the top batsman for England in England vs India 4th Test 2021 on 22bet.

India openers have been consistent throughout the series. Both KL Rahul and Rohit Sharma have scored about 250 runs in the 3 Tests so far.

Place a bet on India putting up the highest opening partnership in England vs India 4th Test 2021 on 1xBet.

Place a bet on any player scoring 100 or more runs in England vs India 4th Test 2021 on Betwinner.

Player of the match

Joe Root again! The in-form English skipper should be the player of the match. Root has scored 507 runs in 5 innings at an average of 126.75 with 3 hundreds and a fifty.

Place a bet on Joe Root for player of the match in England vs India 4th Test 2021 on Casumo.

Top Bowler for India in the first innings

Jasprit Bumrah should be the top bowler for India in the first Innings. Bumrah has taken 14 wickets for India in 5 innings of this series so far.

Top Bowler for India in the first innings: Jasprit Bumrah (3.25)

Place a bet on Jasprit Bumrah for Top Bowler for India in the first innings in England vs India 4th Test 2021 on Betway.