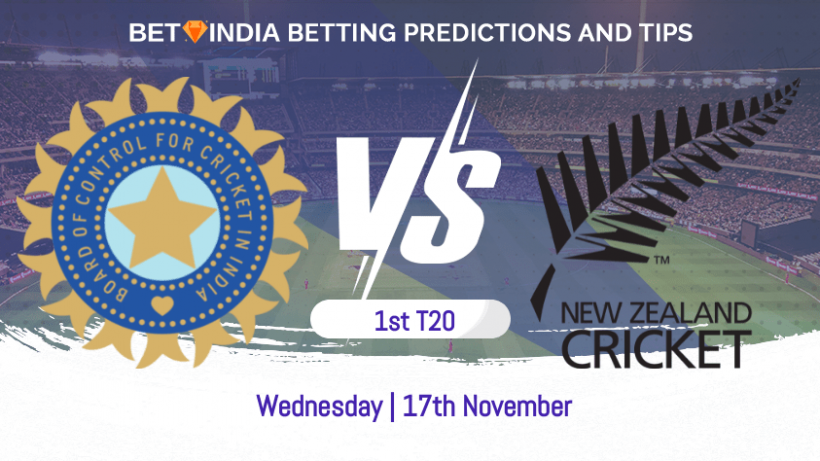 With the dust barely settled on the T20 World Cup, beaten finalists New Zealand head to Jaipur for the first of three T20 matches against India.

With the next T20 World Cup less than a year away, the news T20 cycle has already begun! It's an exciting match for India, who will play their first match under new coach Rahul Dravid. This match will also be the first T20 match under new captain Rohit Sharma, following Virat Kohli's decision to step down.

This will be the first competitive Indian match held at Jaipur for eight years, and 25,000 fanatical fans are due to be in attendance. India are the favourites for the match, priced at 1.44; New Zealand, who beat India at the World Cup just a few weeks ago, can be backed at 2.75.

It was a frustrating World Cup for India, which definitely left the feeling of what might have been. India got their tournament off to the worst possible start by losing to Pakistan by ten wickets; they followed this up with a defeat to New Zealand, which all but eliminated them from contention. India did leave the tournament on a high following three convincing victories over Afghanistan, Scotland, and Namibia but failure to qualify from the Super 12 phase has to go down as a failure.

As one cycle ends, another begins, and India will aim to start their recovery under new head coach Rahul Dravid. Playing back on home soil, India will want to get the Dravid era off to the perfect start; India will be without the trio of Virat Kohli, Ravi Jadeja, and Jasprit Bumrah, so expect some new faces for Dravid's first game in charge.

This will be a tough match for New Zealand, who lost their third successive major white ball final just three days ago. The latest final defeat to Australia has just added to the heartbreak that New Zealand have experienced in recent years following 50 over World Cup defeats in 2015 and 2019, as well as this latest T20 failure. Despite losing in the final, the tournament has to be considered a success for the Black Caps, who beat both India and England on their way to the final.

Here they take on an Indian side they have had the measure of in recent years, having beaten them in the 2019 World Cup semi-final, the final of the World Test Championship, and in the recent World Cup.

Facing a rested and rejuvenated Indian side will be no easy task for New Zealand, particularly with the late announcement that Kane Williamson will play no part in the T20s.  After such a tough defeat, it will be fascinating to see how much has been taken out of the Black Caps both physically and mentally.

This will be the first India match held in Jaipur for over eight years, and tickets for the game sold out in minutes. 25,000 fans are expected to watch this contest.

The last professional game held at the ground came back in 2019, and this will be the first time the stadium has played host to any form of international T20 cricket. Traditionally spin bowlers have taken more wickets and have a better economy rate than their seam counterparts. The weather for the clash is set to be fine, but as this is a day/night game, expect dew to play some part, especially as the game wears on.

It's hard to believe that just days after the climax of the World T20 final, the cycle for the next tournament has already begun. With New Zealand still potentially recovering from that loss and being without Kane Williamson, Trent Boult, and Devon Conway, all signs point towards an India victory.

India will want to quickly cement themselves as one of the prominent T20 sides in the world and build on the three positive results they had to end their World Cup campaign. India will also want to exact some revenge on their opponents following a trio of high-profile recent defeats.

Played in what is going to be a cracker of an atmosphere, excitement surrounds this Indian team following the appointment of Rahul Dravid and Rohit Sharma as T20 captain. We think India will provide Dravid with the perfect start in front of fantastic home support, and we are backing India to go 1-0 up in the series.

In his first T20 game as captain for India, it makes sense to side with Rohit Sharma to be his country's top scorer in this clash against New Zealand. Sharma was solid in the World Cup but would have wanted to score more runs given the opportunity.

In the face of a new dawn for Indian cricket, look for Sharma to put his immediate stamp on his team by taking it to the bowlers and being his side's top scorer.