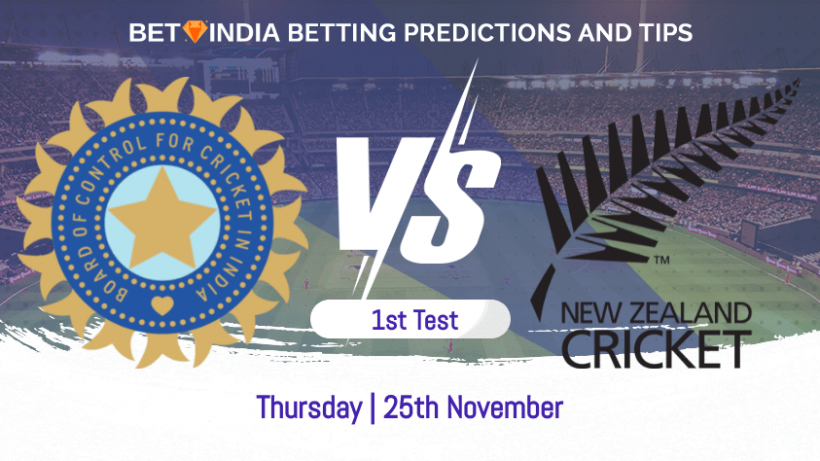 After a three match T20 series, attentions now turn towards a two match test series between India vs New Zealand. After a 3-0 whitewash in the T20 series, New Zealand will be hoping to restore some pride in these test matches. It’s a match up between the two best test playing nations and a renewal of a rivalry that has spanned across all formats of the game. The two sides locked horns earlier this year in the final of the inaugural World Test Championship. The final held in England was severely impacted by the weather, and after six days of stop / start cricket it was New Zealand who emerged victorious.

As they have done in recent T20 games, India will be looking to avenge previous defeats. The Indians are priced at 1.62 for victory, whilst New Zealand can be backed at 4.75.

This encounter marks the first test match that Rahul Dravid will oversee as the new Indian Head Coach, Dravid, a legend in the test arena will be hoping that his side can perform to the high levels that he reached throughout the majority of his exceptional test career.

Following the T20 success over the Black Caps confidence will be high that India can get the job done in the test arena. Beating India away from home is one of the hardest challenges any team can face in the world of sport as India have a phenomenal record at home winning 31 of their last 38 tests at home. They have only lost two during this impressive time frame.

Following their recent busy schedule both Dravid and stand in captain Ajinkya Rahane have a series of decisions to make. Virat Kohli, Rishabh Pant, Rohit Sharma and KL Rahul will all miss this game which could leave the Indian batting line up slightly exposed. India will need to dig deep into its batting reserves.

India will want to cement themselves as the best multi format team in the world, a title that arguably New Zealand can lay claim too. Beating New Zealand and winning this two match test series would put them on the right footing.

It’s been a long old slog for New Zealand who have been on the road and in a bubble for several months now. Perhaps the fatigue of being on the road is catching up with them as New Zealand were put to the sword fairly convincingly across the three match T20 series.

New Zealand have been one of the form test sides in all of the world but they do have a miserable record when it comes to playing test match cricket in India – they have only won two tests in India, drawing 16 and losing a further 16. Their last win came all the way back in 1988!

The Black Caps do receive a boost with the return of captain Kane Williamson who sat out the T20 portion of the tour, also set to return is tall paceman Kyle Jamieson who will be looking to cause this patched up Indian batting lineup all sorts of problems with his height and bounce.

Also coming into the New Zealand attack will be spin bowler Ajaz Patel, Patel has claimed 26 test wickets in his burgeoning test career to date, with 22 of these coming on Asian soil. He will be looking to add to that haul here.

This match will be played at Kanpur and is a venue that India haven’t lost at since 1983, these sides have played at this venue three times and India remain unbeaten.

The pitch in Kanpur is your typical Indian pitch that will give the spinners a lot of assistance as the match progresses. The first two days could favour the batsmen and since it is winter, the colder air could help the fast bowlers particularly in the morning session. As the match wears on we will see a spin dominated attack from both sides.

Despite the odds heavily favouring India, this is a tough match to call as both sides have some real question marks to answer. Both teams will be walking into the test environment cold and without playing the format for many months, this could be a test match that moves at pace due to rust.

India’s dominance at home is a major factor behind their heavily favoured odds but in our opinion you have to take that price at a warning. India are missing a slew of absent stars and they will come into this match with a very different line up to what we would normally expect. You could also argue that batsman like Pujara and Rahane are entering these matches woefully out of form and are in real need of runs.

New Zealand are a side that are so accustomed to turning over the odds and despite some new faces they are a side that always seems to gel and are able to perform to a high level constantly.

New Zealand will be no push overs and at the prices we wouldn’t discourage anybody backing them, however on home soil India just know how to get the job done and we are going to side with them to cross the winning line in what will be a fierce contest.

It is anticipated that Shubman Gill will move to the middle order in a rejigged batting line up due to the large amount of missing players in the Indian team. Gill who has opened the batting in eight test matches and scored three half centuries is a class and solid option to have down the order and at odds of 4.50 could be a great option to back as India’s top scoring batsman.

In his early test career to date, Gill has averaged 31 and he can show a mix of patience and power. At just 22, Gill has the ability to turn a match in his sides favour and he is who we are backing here.

Place a bet on 1xbet by registering with the code 1BETINDIA1 and get a 130% bonus of up to Rs. 13,000 if you bet on Shubman Gill to be India’s top batsman in India vs New Zealand 1st Test.