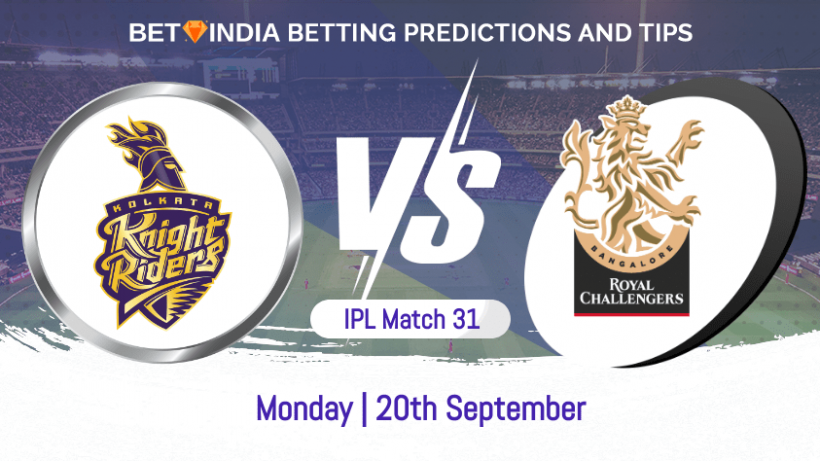 The biggest domestic league in cricket – The Indian Premier League – will be back from this Sunday. The second phase in UAE is being seen as practice for the upcoming T20I World Cup, which will be held jointly in UAE and Oman. The Kolkata Knight Riders vs Royal Challengers Bangalore 31st Match IPL 2021 will be played at Sheikh Zayed Stadium on 20th September. With all the buzz, fans are expecting a nail-biting fight between two of the most followed teams in the IPL – KKR and RCB.

The Kolkata Knight Riders had a very bad first half of IPL 2021. They won just two out of the seven games they played to find themselves in seventh place at the points table.

The Knight Riders will be looking to turn things around and will bank on the all-rounder duo of Andre Russell and Shakib Al Hasan. Andre Russell finished this CPL 2021 season with 160 runs at a strike rate of 175.82 and 11 wickets. On the other hand, Shakib was the player of the tournament against Australia for his all-round display. Shakib scored 114 runs and took 7 wickets to win the series for Bangladesh.

Kolkata will miss their leading wicket-taker Pat Cummins and have signed Tim Southee as his replacement, who is equally capable.

Royal Challengers started their IPL 2021 campaign by winning the first four games on the trot. But as usual, they lost track by losing 2 out of their next three matches.

A fiery Batting lineup is one thing Royal Challengers have maintained since the start of the IPL. Paddikal, Kohli, Maxwell, and de Villiers will be the key players for the second phase of IPL 2021. AB de Villiers has shown time and again that the talisman is never going to age. In IPL 2021 till date, he has scored 207 runs at a strike rate of 164.28 in 6 innings.

Bowling will be led by the current leading wicket-taker of IPL 2021, Harshal Patel. He has 17 wickets in 7 matches. Tim David, who has been signed as a replacement, will be the player to watch out for after finishing the CPL season with 282 runs in 11 games.

Sheikh Zayed stadium usually provides a flat pitch. Therefore, it is usually easy for the batters to play their shots. However, the pitch gets sluggish later on in the game to assist the spinners.

Clear weather prediction for the match day, without any rain interruption, indicates the chances of a high-scoring game.

Bet365 has favoured Royal Challengers Bangalore at odds of 1.66. With the track record against the Knight Riders in the UAE and the current form of the players, the Royal Challengers should win the game to start the second phase of IPL 2021 on a winning note.

When you see the playing 11 containing the name of King Kohli, you don’t go past it. The swashbuckling skipper of Royal Challengers is the main reason people don’t change the TV channel. Known for classy cover drives, Kohli is the highest run-scorer in the history of the IPL. With the ICC World T20I a month away, Kohli would be looking to get back to his best in the shortest format of the game.